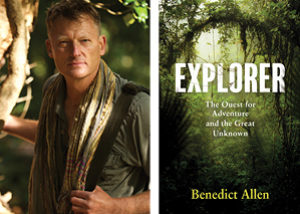 Benedict Allen Explorer: The Quest for Adventure and the Great Unknown

What does it mean to be an explorer in the twenty-first century? Benedict Allen describes what impelled him to head for the farthest reaches of our planet – at a time when there were still valleys and ranges known only to the remote communities who inhabited them - and why, thirty years later, he is still exploring. He'll share the lessons he has learnt from his numerous expeditions – most importantly, from the communities he has encountered and that he has spent so much of his life immersed in. Allen has recorded six TV series for the BBC, and pioneered the use of the hand-held camera for TV, for the first time allowing viewers to witness immersion of a traveller in remote environments without the artifice brought about by a camera-crew.