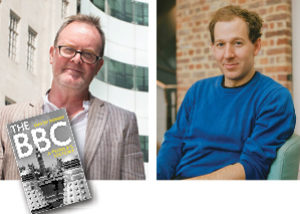 David Hendy and Henry Mance The BBC at 100 - what's in store for Auntie?

In 1922, three men - only one of whom had previously heard of 'broadcasting' - founded the BBC. In doing so, Arthur Burrows, Cecil Lewis, and John Reith set out to accomplish something utterly bold: using what had been a weapon of war - Marconi's wireless - to remake culture for the good of humanity. As the BBC turns 100, the historian David Hendy traces it from its maverick beginnings through war, the creation of television, changing public taste, austerity and massive cultural change, and shares with FT journalist, Henry Mance, his thoughts on what the future holds in a time of challenges to the licensee and competition with the internet and streaming services.