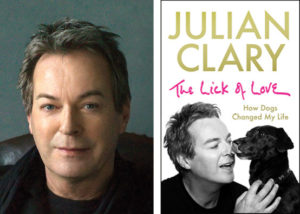 Julian Clary The Lick of Love

Julian Clary is one of the UK's most loved comedians and entertainers. His latest book takes us on a tour of his colourful life through the dogs by his side. From Fanny the Wonder Dog who propelled him up the ranks of the alternative comedy circuit and onto television to naughty but nice Gigi, an unpredictable fur bullet of a dog. These canine characters have been there, bearing witness, on and off stage. Whether writing about encounters in seedy London nightclubs, finding success on television with Sticky Moments, the death of his partner, that Normant Lamont joke, and a narrow squeak with a thwarted eastern European plot to kidnap him, this is the story of a fascinating life and a love letter to the dogs that have played a loving and near constant part of it.